Azeptieren Ablehnen Lies mehr. Cookies Politik. Out of these cookies, the cookies that are categorized as necessary are stored on your browser as they are as essential for the working of basic functionalities of the website.

We also use third-party cookies that help us analyze and understand how you use this website. These cookies will be stored in your browser only with your consent.

You also have the option to opt-out of these cookies. She is quick to defend herself and accidentally stirs up a rivalry between her and Zoey for the position of leadership for the cross-country team at Horseland.

She is voiced by Rachel Ware. Nani's horse is Sunburst, a generally calm and polite palomino Paint gelding with yellow highlights.

He has a single braid under his mane. His symbol is a yellow sun with blue lights, representing dignity. Shep is a wise male collie , who acts as the leader of the animals at Horseland, and is the narrator of the series.

He is a very loyal ranch dog and always helps the horses in times of trouble. Shep often serves as the voice of reason for Teeny and Angora, and, to illustrate a moral or lesson, frequently relates stories to Teeny most of the episodes are actually flashbacks to previous events.

He is friendly, perceptive, and protective of both the horses and the riders at Horseland. His owner is Bailey. Shep has been with him since he was a pup.

Shep would frequently break the forth wall from time to time, addressing the audience about the episode's lesson. Shep is voiced by Jerry Longe.

Teeny is a young, adorable, chubby black-and-white potbelly pig who wears a pink ribbon on her tail. She displays an innocent, naive personality, and often becomes anxious over relatively small situations.

She is well-intentioned, though simple-minded, and Shep usually acts as a friend and mentor to Teeny, in contrast to Angora, who frequently teases her.

Angora is a gray, long haired Turkish Angora with bangs that sweep over her eyes, white chest tuft, green eyes and a pink collar.

She is often dismissive of other animals, and feels that she deserves better treatment than anyone else, due to her self-absorbed and arrogant nature.

Angora's favorite people are Chloe and Zoey because they're so much like her. A running gag in the series involves her love of trouble and hatred of peace at Horseland.

However, she shows genuine concern whenever Shep and Teeny are in true danger. Cubby is a brown Pomeranian puppy. He was found abandoned by Bailey in "New Pup in Town".

Bailey later adopted Cubby in that same episode. Alma becomes jealous because she wants a dog, but because her dad is the foreman at Horseland she's not allowed to have one.

Shep is initially jealous of Cubby. When Cubby runs away Alma and Shep put their jealous feelings aside and help Bailey bring him home.

Alma takes Bailey up on his offer to share Cubby with him. Shep and Cubby eventually become friends.

Simbala is an Indian girl who meets the Horseland gang on a trip to France in the episode "International Sarah".

She is thoughtful, sweet-natured, and is proud of her culture, choosing to wear traditional dress and a bindi.

Her father knows Sarah's father, and the two girls became friends after falling into a cave. She loves riding, fresh fruit, and dental floss.

Simbala's horse is Ranak, a black stallion with a blaze. He hates plane rides, but enjoys sugar cubes and being alone. After initially irritating the other horses with his worried whinnying, he apologizes and becomes friendly to them.

He also has an accent. His color is dark blue. Jesse is a boy who visits Horseland while his parents' farm, Golden Corral Ranch, is being remodeled.

He appears in the episode "Bailey's New Friend", in which he unintentionally causes a rift between Bailey and Sarah.

Like Bailey, he enjoys video games, taking care of his horse, talking, and being a bit of a daredevil. Both Molly and Alma mention that he's a "cutie", and Chloe and Zoey express that they think he is "hot".

Jesse's horse is Buddy, a large chocolate flaxen stallion. He is brave, headstrong, and misses his home while away. He has dark teal stripes in his mane and tail.

Alexander is Alma's pen pal, seen in the episode "First Love". While his letters to her made him seem like a wealthy champion rider, an intentional facade meant to impress her, he really only rides for fun, and is rather timid.

His parents are the proprietors of a traveling circus. However, he admires Alma and her incredible riding abilities, and shares her love of reading.

He performs in the circus and enjoys his life, despite its lack of glamour. His color is maroon. Mary is Sarah and Chase's cousin, a humorous, independent girl who doesn't let the fact that she is blind get in the way of her positive attitude and independence.

Mary appears in the episode "A True Gift. She loves horses, riding, and the outdoors. Mary's horse is Prince, a white Thoroughbred stallion who is said to be the fastest horse ever to come to Horseland, a 'fact' that causes Scarlet to get jealous and worried that she'll be replaced.

Sarah temporarily rode him in Scarlet's place in order to make sure that he was a good enough horse for Mary.

He also has a white wavy mane and tail with light blue highlights. Talia is a talented but mean-spirited girl who is both confident and competitive.

She appears in the episode "Changing Spots" and is the premier show jumper at Stanhope Academy, Horseland's biggest rival.

She is Alma's nemesis, and the two show special animosity towards each other after they get in a fight about who deserves to win an upcoming competition.

Talia's horse is Kisses, a beautiful Camarillo White Horse mare. She is an excellent show jumper, but is never given a chance to speak to any of the other horses.

Her highlight color is light pink. Chase is Sarah and Mary's cousin who comes to visit in the episode 'The Secret.

Chase has light brown hair and blue eyes. His horse Wonder is a dark bay Anglo-Arabian stallion with green stripes. Wonder never talks to any of the horses in the episode.

Jasmine and Amber are two of Molly's close friends from the city. Both of the girls are confident, loud, and playful, and enjoy having a good time all the time.

Neither of them go to Horseland, but do express an interest in horseback riding. Despite frequently teasing Molly, the two are genuinely supportive of her interests.

Amber is African-American, and has dark brown eyes and long wavy hair. Jasmine is of an Asian ethnicity, and has light hazel eyes and dark-colored hair.

Both have light blonde hair, blue eyes, and favor the color light pink, although Alexia is much shorter than her companion. Throughout the episode, Linnea becomes close friends with Sarah.

Linnea's horse is Windy, a mare who looks like Talia's Kisses and wears an ornate bridle. She also has a volumous wavy mane and tail. She doesn't understand English and only speaks her native tongue, and fails to respond to any of the other horses' attempts to speak to her, causing them to think she was rude.

Diablo is a red Welsh stallion with an injured back leg who belongs to a girl named Madison. He initially has aggressive and rude behavior and was brought to Horseland so that Sarah could use her "way with horses" to try to help him recover.

His only appearance is "The Horse Whisperer". His name means " devil " in Spanish. He also has a wavy mane and tail.

He is voiced by D. Kevin Williams. Puma is a buckskin mustang stallion staying at Horseland to be tamed by Will. His mane and tail are black with white stripes.

His only appearance is in the episode "Wild Horses". He tells Aztec about what it's like living in the wild, which prompts Aztec to run away.

Puma, however, loved the wonderful treatment he was given at Horseland. It is mentioned that he loves oats , which is shown in the same episode.

These horses are met by Aztec when he runs away from Horseland. The two identified by name are Chaco, a black mustang stallion who doesn't want Aztec on their territory, and Mesa, a cream colt that befriends Aztec.

Other horses in the herd are a pair of bays, Mesa's cream mother, and a brown paint female. They all have plain manes and tails.

River is a famous racehorse stallion that comes to Horseland to recuperate from a leg injury. He is dark grey with a white mane and tail, and has periwinkle stripes.

His only appearance is "A Horse Named River", during which it's revealed that he's become an elderly, unenthusiastic horse, nothing like the speedy youthful stallion Chili's been a fan of his whole life.

He was younger and belonged to an unnamed girl in flashbacks. Cream is a white-colored colt that has light pink stripes and his sister, Sugar, is a light gray filly that has light blue stripes.

They are fraternal twins, and only appear in the episode "Oh, Baby". They visit Horseland when their mother was sick and couldn't take care of them.

Win or Lose" and "Taking the Heat", each containing 2 episodes. All of the DVDs included trailers for other cartoons, bonus features, and interactive menus.

These releases have since been discontinued and are out of print. From Wikipedia, the free encyclopedia. This website uses cookies to improve your experience. 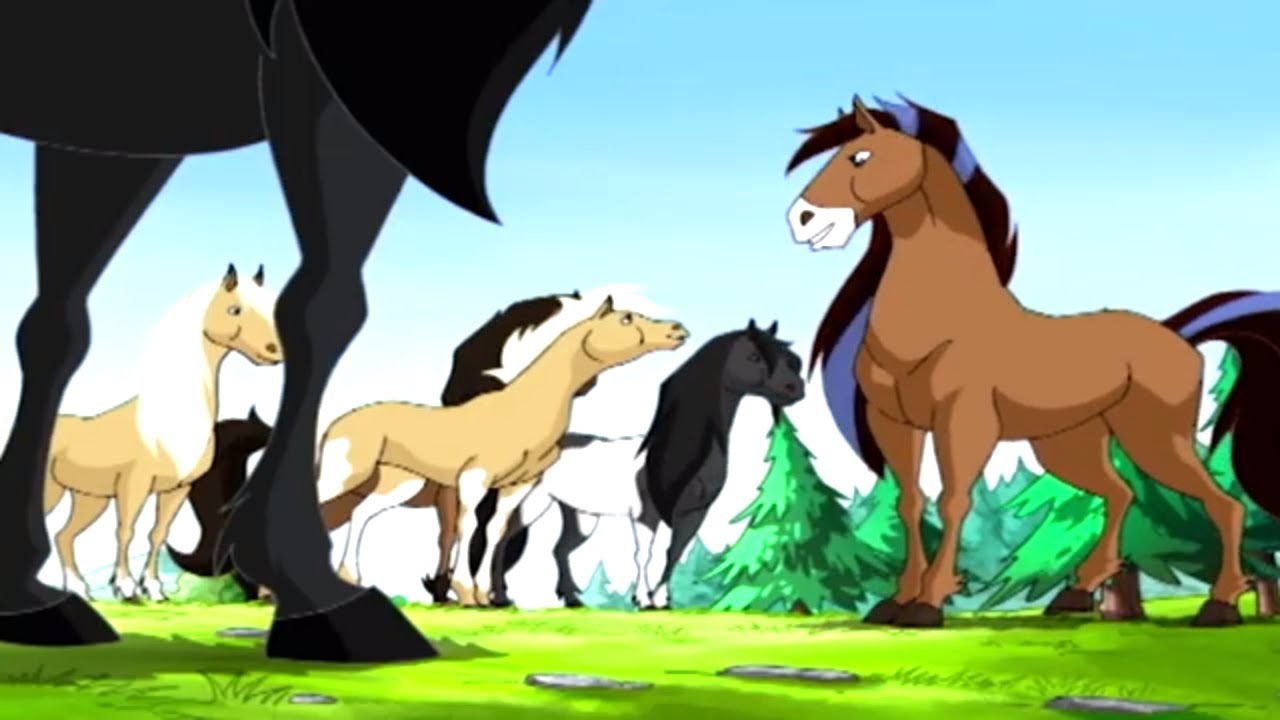